YOUR HISTORY IS HERE

After two years of the pandemic, the museum was excited to be back celebrating the Williamstown Fair. 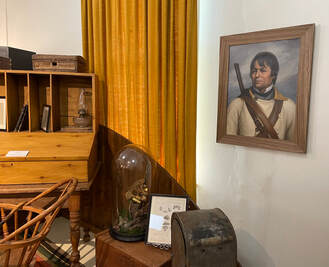 The Face of David Thompson Summer 2022

In April, the museum finally hosted its long-awaited event commemorating the birth of David Thompson. The commemorative gala featured special guest D'arcy Jenish speaking on David Thompson's life as well as the unveiling of David Thompson's oil portrait, commissioned by Aino Lutter. Thompson's career began in the fur trade and it was under the employment of the Hudson's Bay Company that he first learned the skills for map-making. Over his career as an explorer, working for both the Hudson's Bay and North West company, he would create hundreds of maps, write more than three dozen pieces as a contributor for the Montreal Gazette and Montreal Herald, and leave behind one hundred and eighteen notebooks recording descriptions of his travels and those he encountered on his journeys, work, and personal life.

Despite his major contributions to Canada as a developing nation, Thompson would die in poverty as his petitions for a pension and public employment would go unanswered. Due to these unfortunate circumstances, Thompson was never able to afford a portrait. Historians have long used descriptions found in friends and family's letters to imagine what he looked like, and these resources were used as a basis for the portrait by Lutter, who's work has finally allowed us to put a face to the infamous name. His portrait now hangs in our Nor'Westers Exhibit, along with his desk and a model sextant. Copies of his portrait are available at the museum gift shop.
Recognized for Recognition....
The museum mounted an exhibit meant to recognize the contribution of agriculture to our community titled "Salute to Farmers." From this event came the publication "Salute to Farmers of South Glengarry" which detailed  local farms and  farming families who particpated in telling their stories. The exhibit and publication were a great success with hundreds of copies sold. The museum was, in turn, recognized for its recognition of agriculture by the Onatrio Association of Agrciultural Societies by being presented with the meritous Service Award  for outstanding and dedciated servie to the St. Lawrence Valley Agricultural Society. 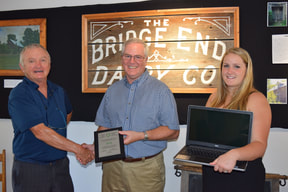 Funding From the Ontario Trillium Foundation

​The Glengarry, Nor’Westers & Loyalist Museum of Williamstown, Ontario was pleased to welcome MPP Jim McDonell to the museum on Saturday, August 27th, 2016. MPP McDonell was invited to host a small event for the Ontario Trillium Foundation in recognition of the generous grant they bestowed upon the GNLM this past spring. In the ceremony, MPP McDonell presented the GNLM board of directors president, Kenneth MacDonald, with a plaque from the Ontario Trillium Foundation acknowledging the awarded funding. The grant was geared towards updating existing and expanding new technology so that museum functions could be performed more efficiently and in an increasingly diverse and effective way, fitting the needs of this digital age.

By applying for this grant, the museum sought to overcome some significant obstacles it had in the relaying, preserving, and presenting museum content to the public. The museum had only one computer set up in their small office space but the grant allowed for them to purchase another computer for their upstairs workroom, enabling multiple volunteers or staff members to work at the same time. The cataloguing software used at the museum was also added to the new computer so that people could access and work in the database simultaneously and have the cataloguing system in better proximity to the artifact room. Additional equipment purchased under the OTF capital grant were a new camera, a blu-ray player, and a laptop. The museum seeks to create audio/visual material with these pieces so that the offerings of the museum and community in general can be broadcast more widely and to an increased audience who might find spending a day or weekend touring Williamstown to be of interest.

The museum is also putting this equipment to good use in respect to its educational value. With increased technology here at the museum and the ability to create engaging and mobile audio/visual content that could be shared easily, the museum hopes to reach much larger audiences and offer engaging material to all ages. The museum and its members are extremely grateful to the Ontario Trillium Foundation for giving them the necessary resources to overcome these obstacles. A provincial organization, the Ontario Trillium Foundation provides funding to many organizations for projects that align with their values which are organized into ‘action areas.’ In this instance, the GNLM’s project of updating and expanding museum technology in order to reach out to an increased audience as well perform tasks more efficiently aligned with Trillium’s ‘Inspired People’ action area. As expressed by the Ontario Trillium Foundation, this area places value on enriching people’s lives through arts, culture, and heritage through connectivity and better quality programming and infrastructure.

A Williamstown resident himself, MPP McDonell was pleased to have the funding granted so locally. Museum personnel behind this project would not only like to thank the Ontario Trillium Foundation itself but also the people behind it such as Trillium representative, Jean-Paul Gagnon who aided the project extensively, providing much guidance and support along the way.